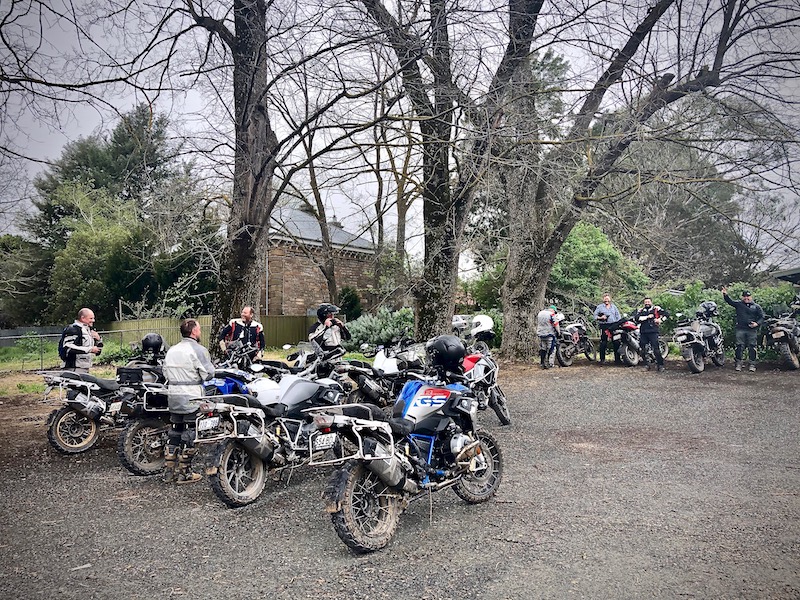 Off the back of 2020’s unprecedented series of rolling events, each month has felt like an island; all part of this strange new landscape of adventure into unknown territory. October was no different. A completely different pace with very little long distance bike travel, but nonetheless an opportunity to jump into experiences never before undertaken.

It started out with a motorcycle training weekend with BMW Off Road Training at Acusa Park; an off-road motorcycle ride park in Harrogate, east of the Adelaide Hills. Prior to embarking on this trip and while waiting for Foragers to sell, I took and repeated an entry level training course offered by BMW in Kirup, Western Australia; to feel more confident riding on dirt, meet other GS riders and have a laff and a lark while endeavoring to stay upright.

This recent training weekend was next level. The humoring, patient generosity and skill of the trainers and the more experienced riders made my many clumsy dumps in the dirt, sand and mud a great deal less bruising. There’s no photographic evidence to prove it but a small controlled power slide and wee front wheel lift felt like a major achievement when it’s been not long past since this whole adventure motorcycling bug bit.

Looking like a motley pack of warriors just off the battleground, the above photo is of most of us in the car park of the Woodside Hotel about to head in for lunch. Having spent most of the time riding solo it’s a bit nerve racking riding in a group. Parking being the place where the most fervent wish and a prayer is offered up that it’s not your bike that dead-weight drops to the ground taking others with it. 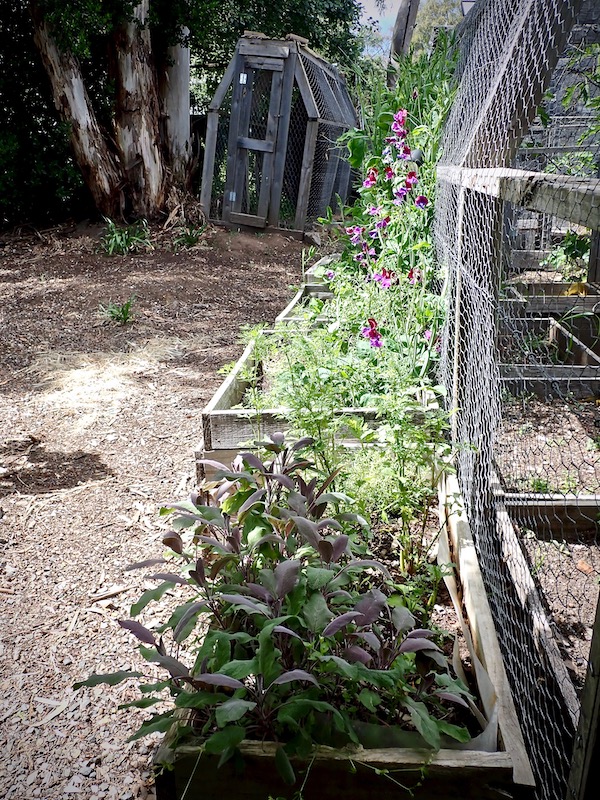 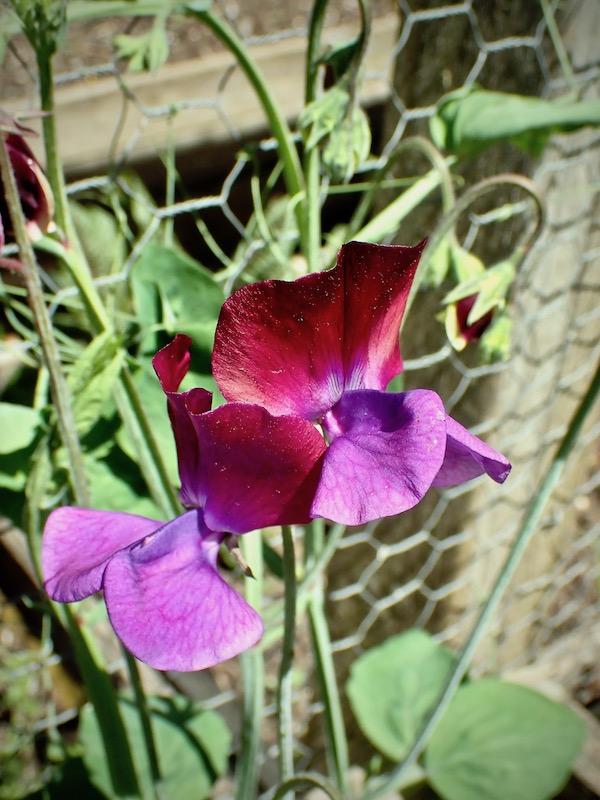 In stark contrast to the grit and grunt of motorcycling, back at my temporary cottage home-base in Angaston, the sweet peas began their beautiful spring show offering a tumbling cascade of colour. These perfumed beautiful flowers offering in some small way compensation for the emptiness of the nearby chook enclosure as a result of a stealthy silent visit of a fox in the night. 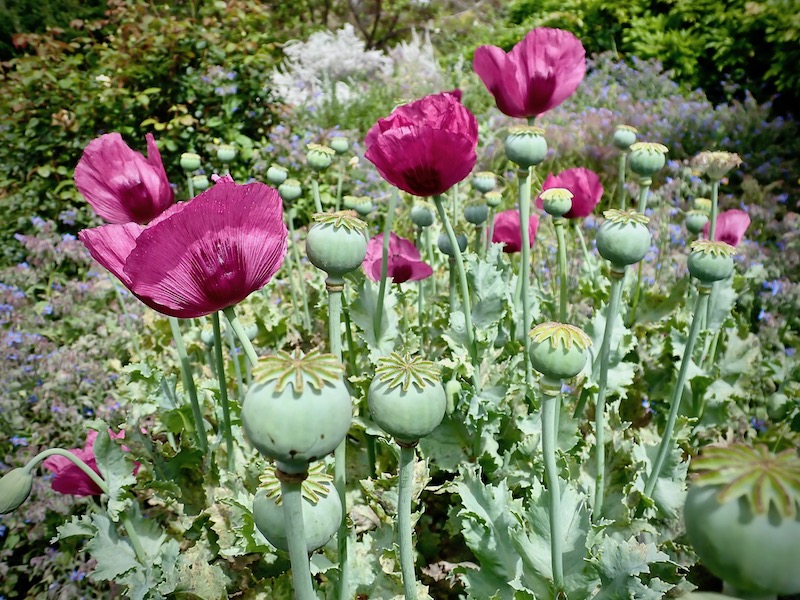 Spring in the Barossa and nearby has been an explosion of garden colour. From sweet peas to poppies, a visit to a friend’s garden in full poppy bloom has been an absolute delight. 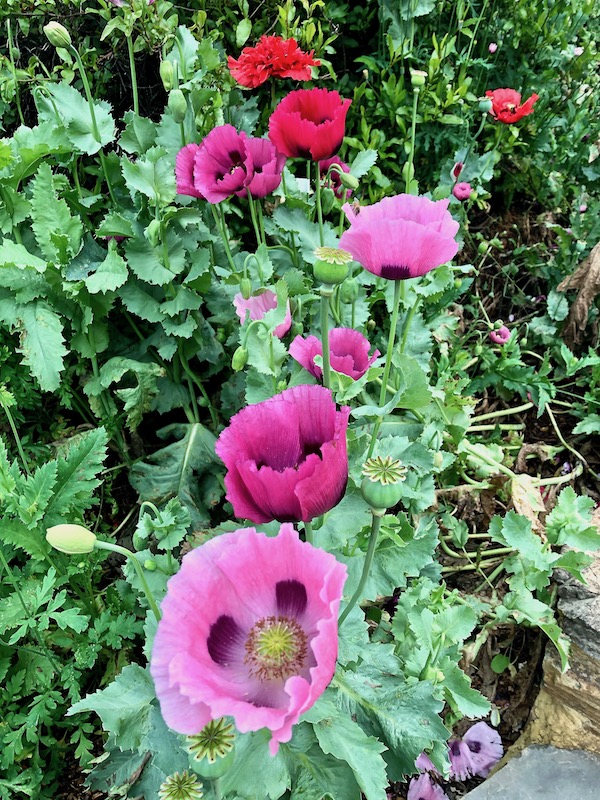 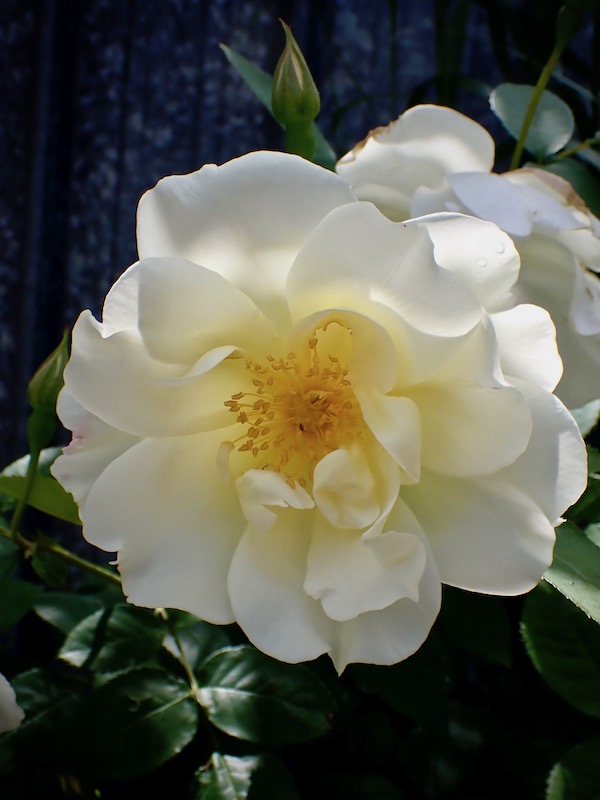 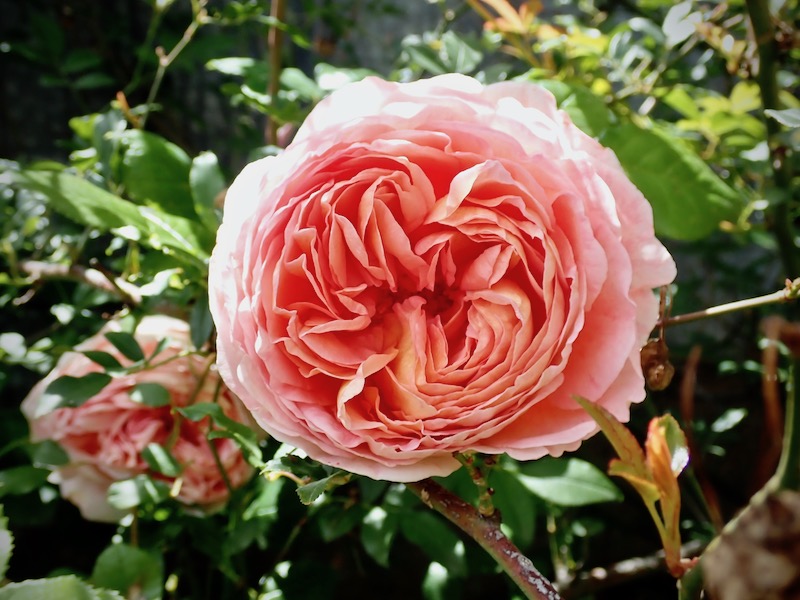 Hybrid and heritage roses in my current cottage garden have also been a delight in their plain and blousey forms and colours. 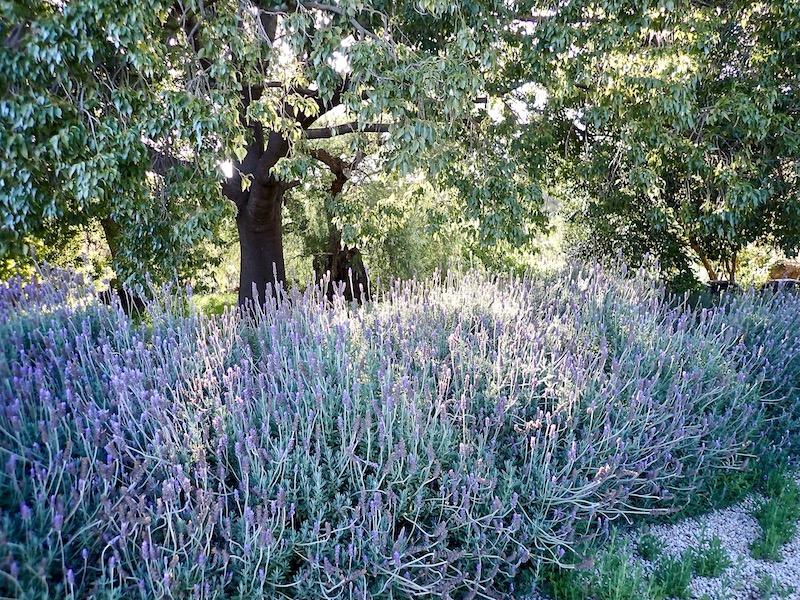 The same friend’s lavender also jostles for space reaching for the morning light while filling the air with its sedating perfume. 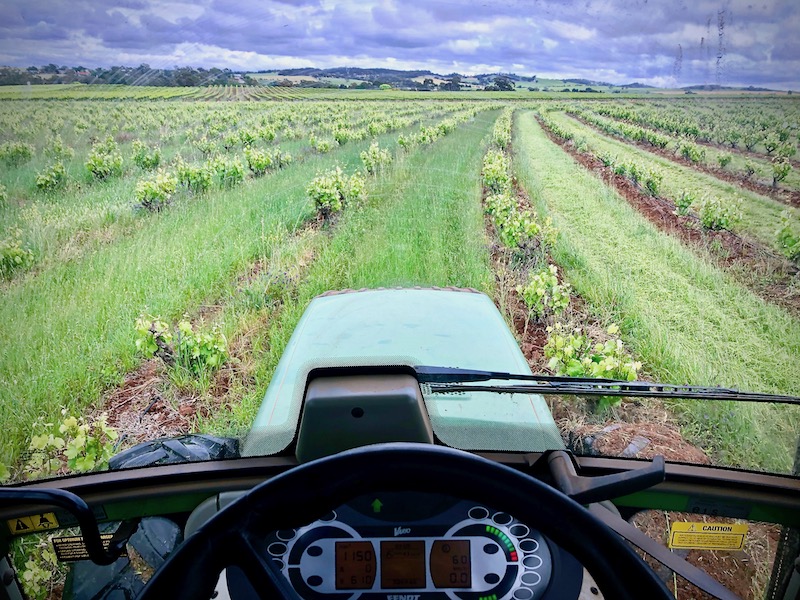 At the beginning of October I started working full time in vineyards for friends here in the Barossa Valley who have a vineyard management business. It’s been a great experience seeing and being involved in this coordinated operation; involving all manner of machinery, equipment, inputs to manage the ever-changing weather related variables, people – from those maintaining and operating machinery, walking the rows, suppliers, property owners, wine makers and managers. I’ve learnt to drive a tractor and quad bike, hitch a trailer, roll out and clip and wire up drip line, trim vine cuttings ready to plant, remove water shoots and many other fetch and field hands-on tasks. I’ve enjoyed it all and have loved this opportunity to work outside after many years of working inside confining kitchen walls. 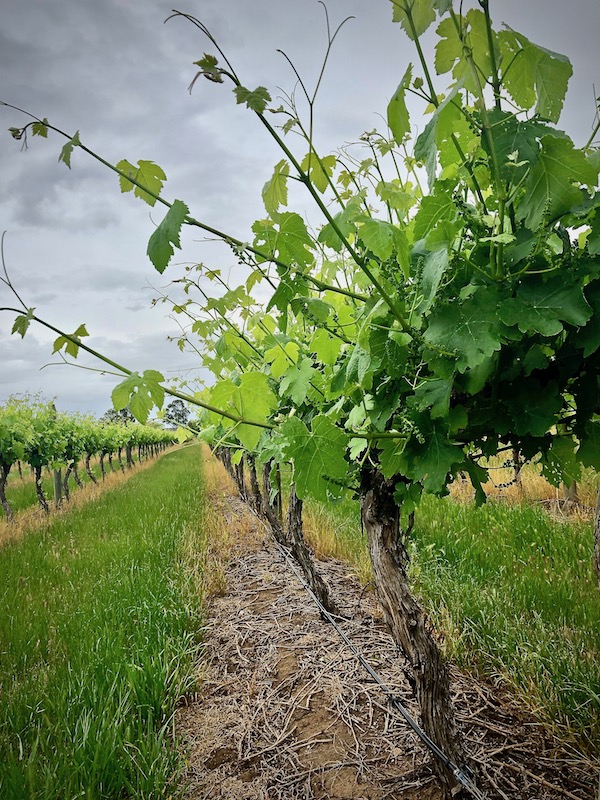 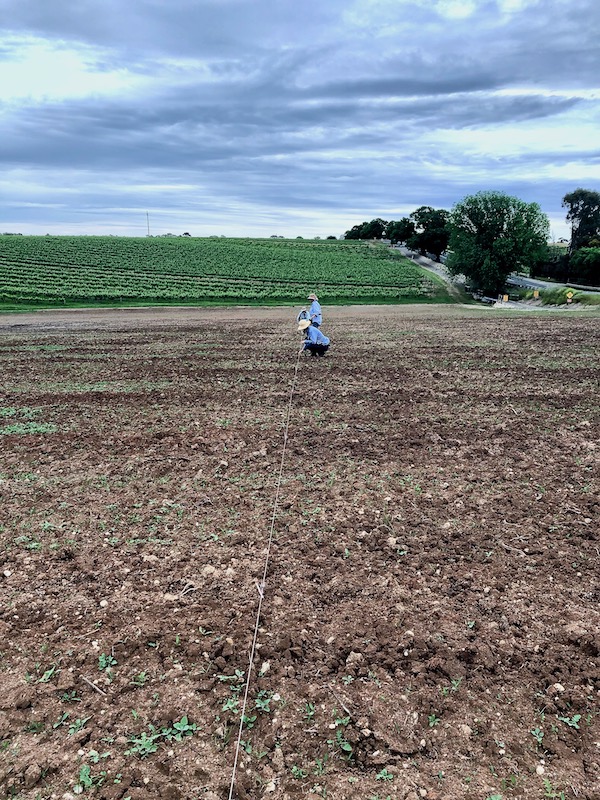 Seeing the blank canvas of an open field being transformed into a vineyard started with marking out where the hundreds of posts are positioned for the supporting wires and irrigation needed for new vines. A string line is held either end while markers are placed into the prepared ground in a calibrated grid. 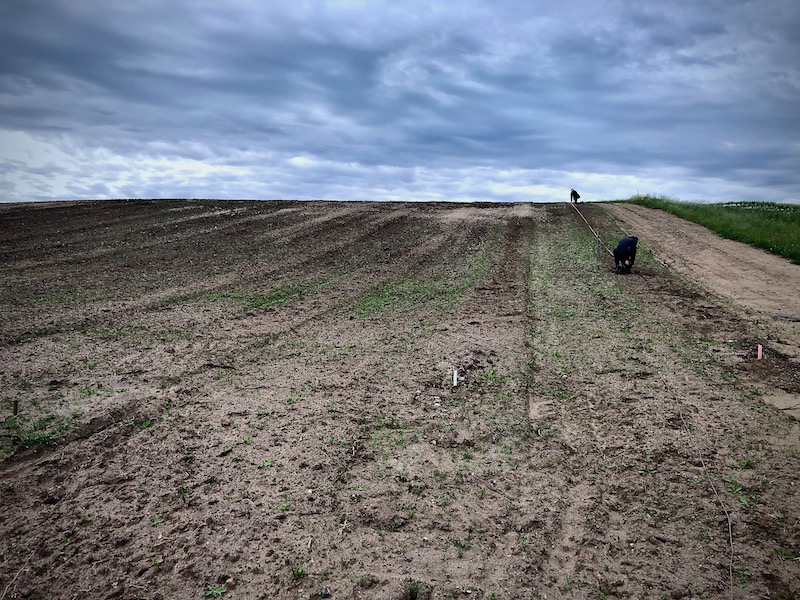 Spacing measurements for posts must also take into account the rise and fall of the land; diagonals and straight lines perfectly planned for the uniformity needed for later efficiency and ease in the many working tasks of the vineyard. 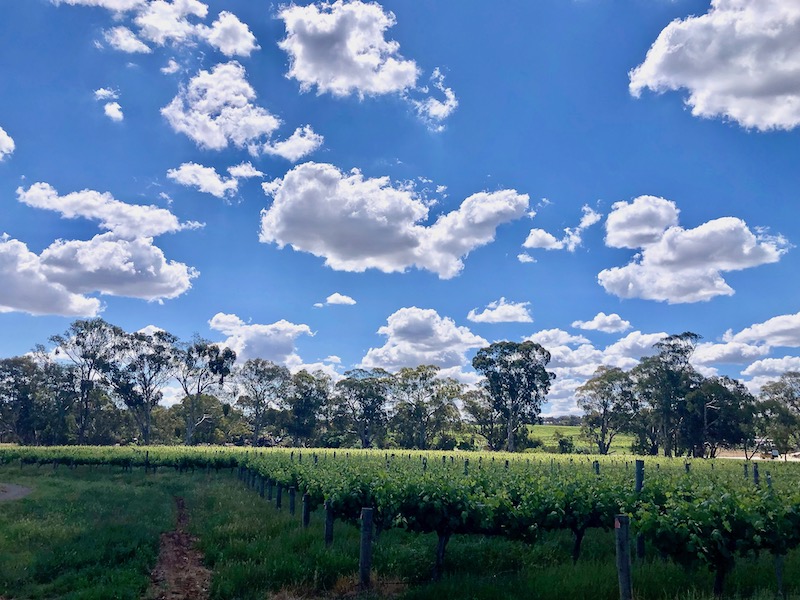 This year in the Barossa has been a stark contrast to last years drought with much welcomed winter rain bringing on rapid growth of the vines and under-vine weeds and grasses. One of my jobs has been to cut the undergrowth slowing its competing need for nutrients and water but maintaining soil stability and vitality. 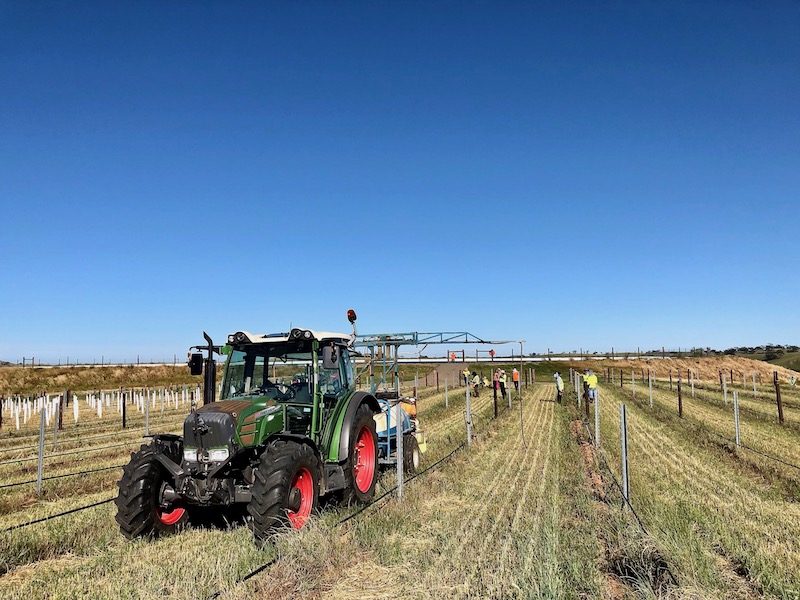 Another task has been to drive the tractor pulling the planter trailer followed by a crew of workers. Arms fold out from the top of a frame that sit above a water tank. Each arm supports two hoses with an attached spear-like pipe and tap that’s plunged into the ground with the release of shot of water to create the hole into which a prepared vine cutting is planted. After the vine cutting is placed in the sodden hole someone follows to carefully bed it in with the surrounding soil. Four rows at a time are simultaneously planted in a planned choreographed team effort; the speed dictated by how soft or hard the soil.

It’s been an eye-opener to learn despite the use of machinery and equipment how much hand-work is still involved in the growing of wine grapes. Like all consumables, we most often take for granted the cost and effort involved in producing a product unless we come face to face with its inner workings. The privilege and value of drinking wine now having a real sense of its true cost. 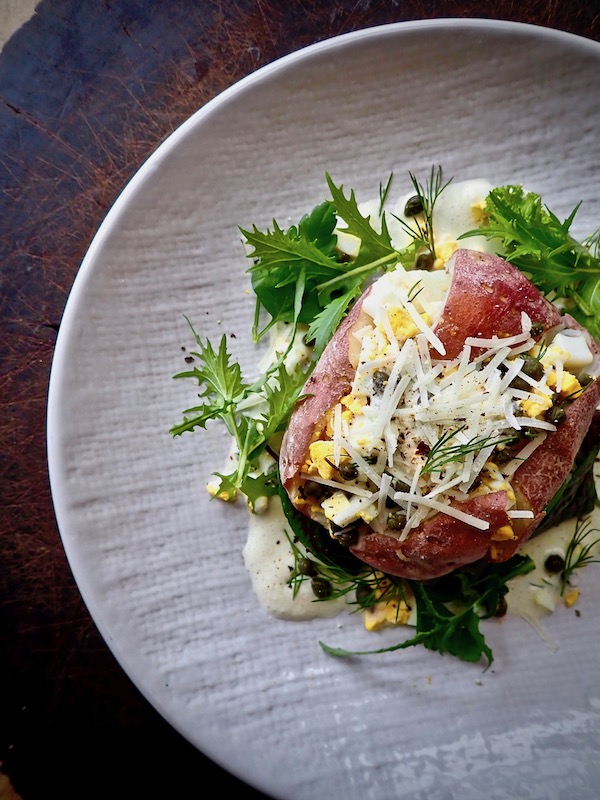 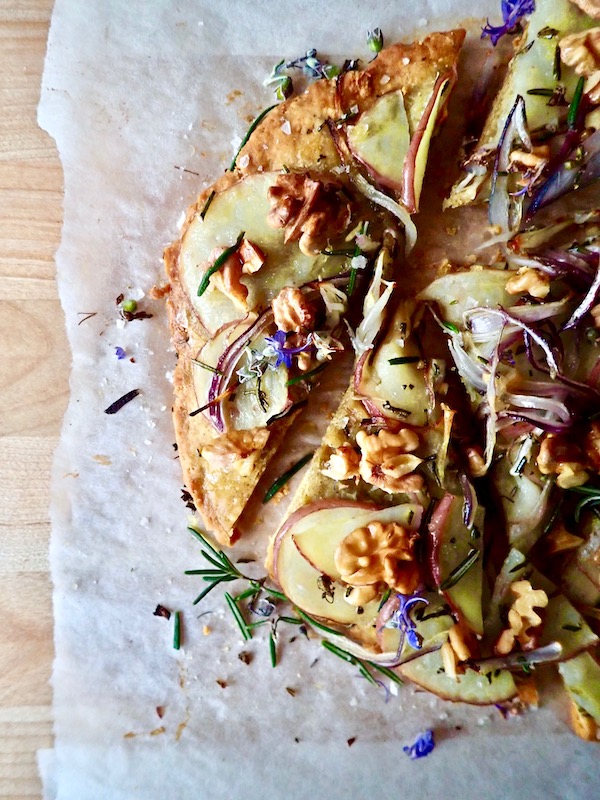 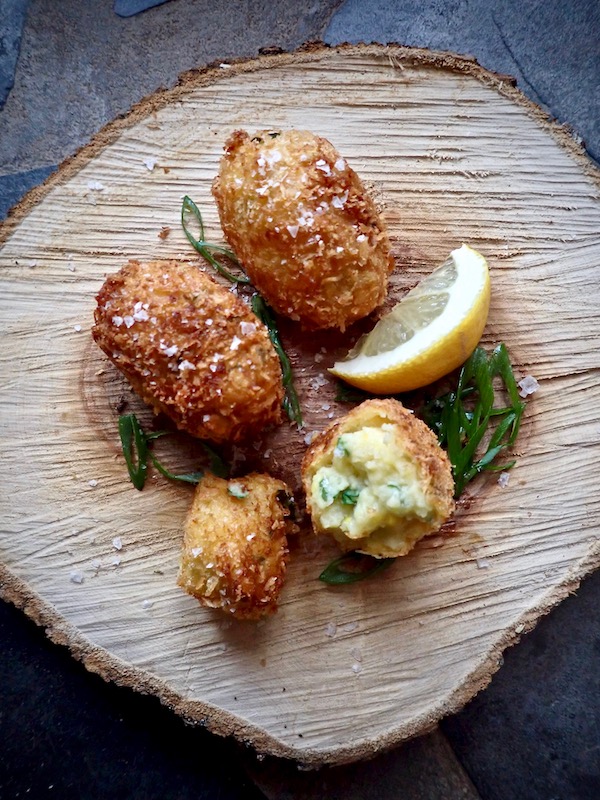 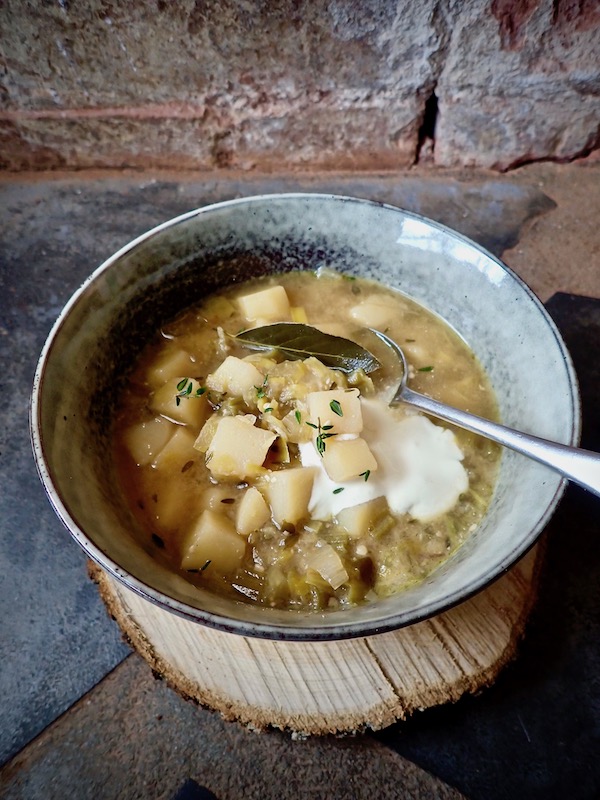 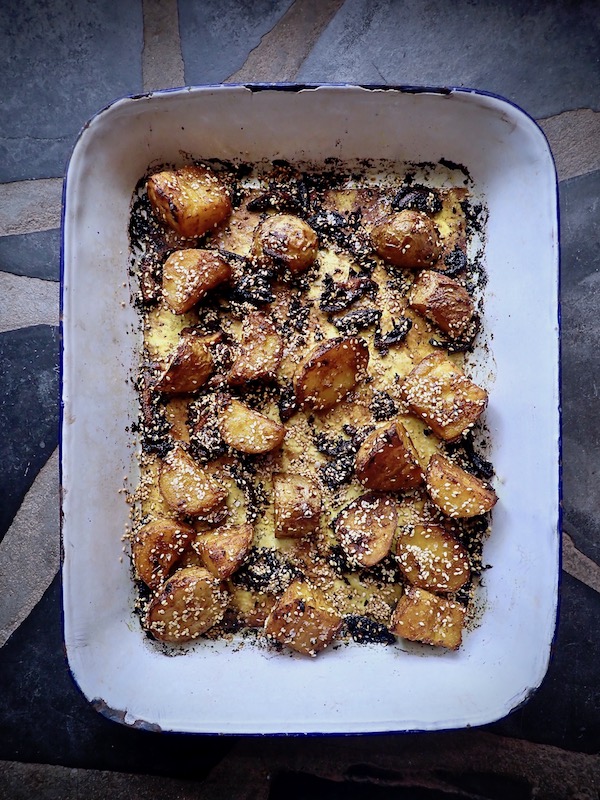 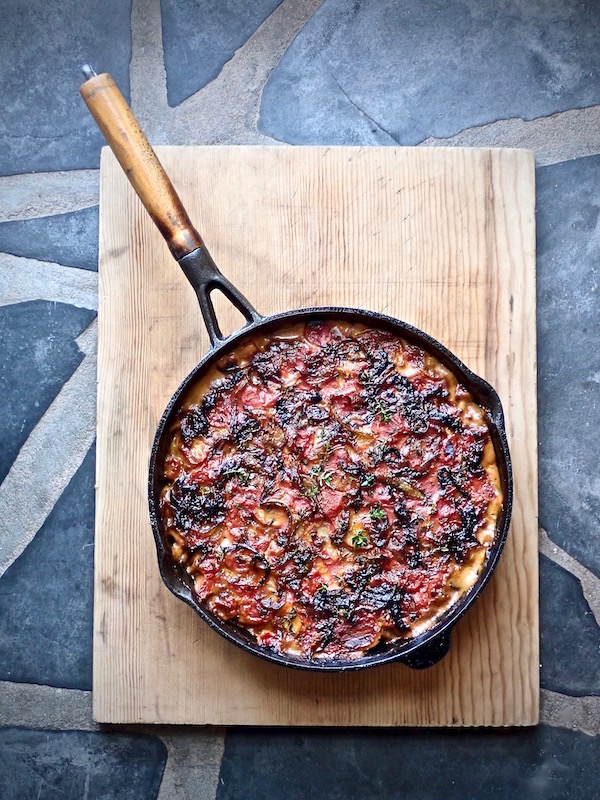 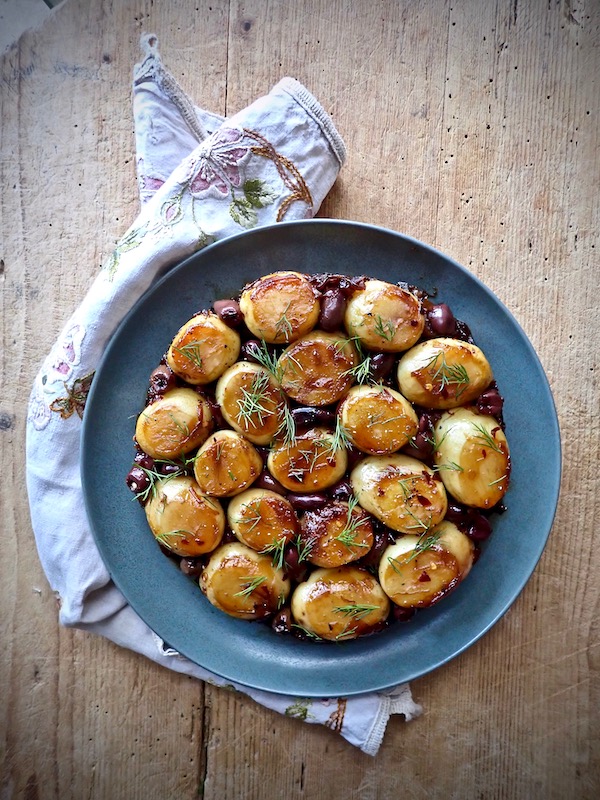 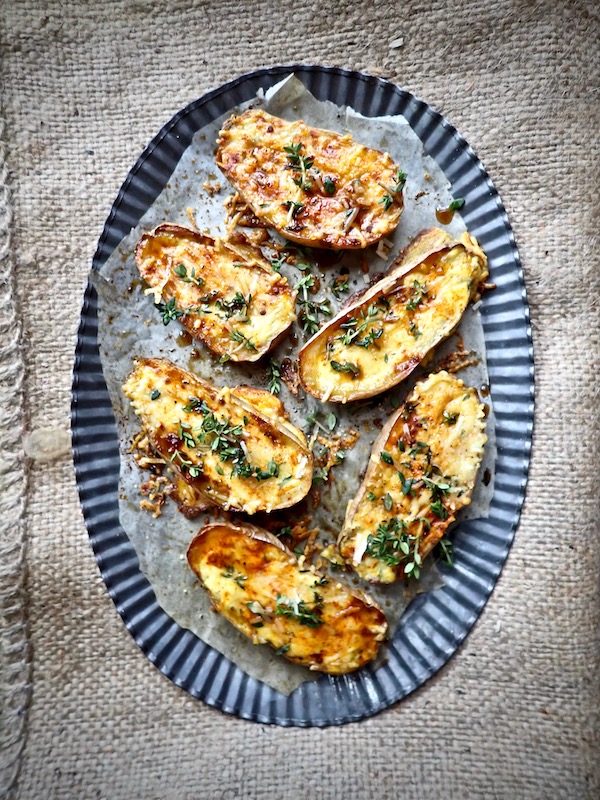 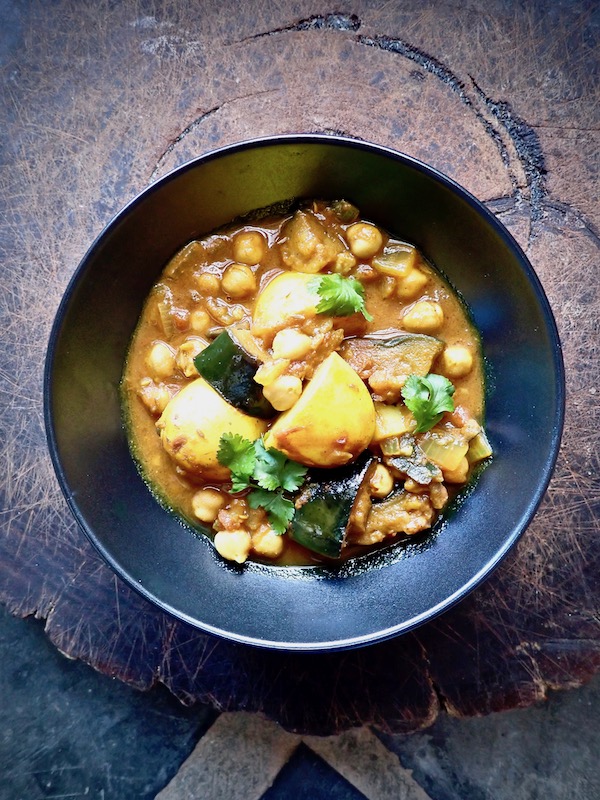 Prior to beginning the vineyard work, I was commissioned by WA Potatoes to develop 10 recipes under $10 for a cookbook aimed at meeting the increased need for nutritious, budget-friendly, simple recipes. The above photos are a sneak peak at the recipes I created for this terrific new project from one of the most proactive and educational primary produce marketing organisations in Australia. Stay in touch with WA Potatoes via social media or contact through their website to learn more about the details of this cookbook yet to be released. 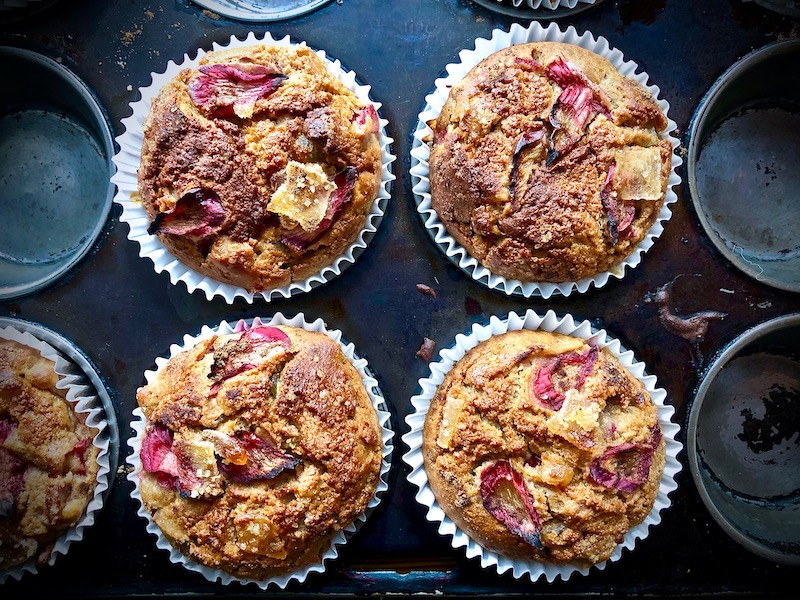 Along with the potato recipes, I’ve also continued contributing a weekly recipe for the local Barossa Valley newspaper The Leader. The above recently published recipe is for Rhubarb, Ginger, Rye Honey Muffins, which is a long time favourite and often varied with whatever soft fruit I have to hand. 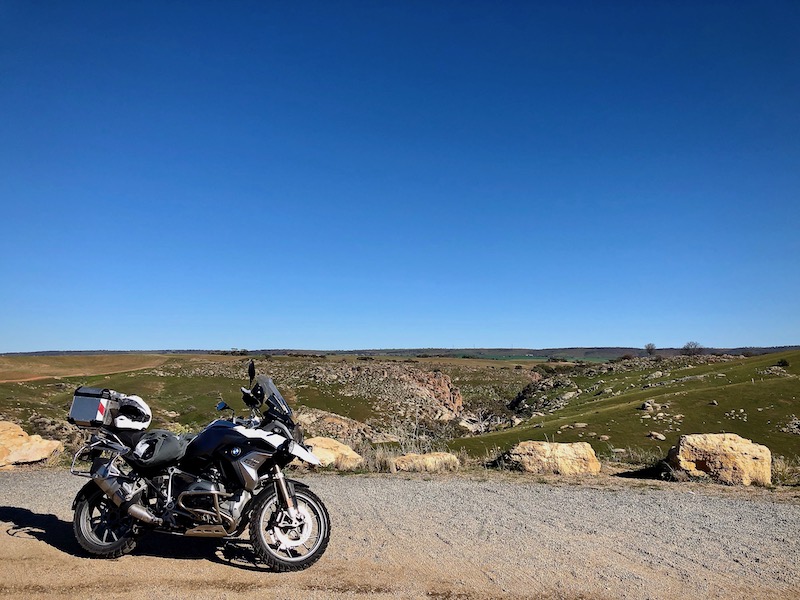 Despite Covid and its restraining and delaying affects, what a ride of sorts 2020’s been. A year ago, on the 26th November 2019 the sale of Foragers settled and handed over to new owners. Perhaps if anything I’ve learnt that despite best laid plans of a solid year of travel post Foragers, the process of recovery and a life after massive change is not dependent on a time frame and a plan.

On day 2 of South Australia’s lock down as a result of a Covid cluster in the nearby Parafield area, this latest diversion is stark reminder that at any given time no one’s yet untouched by this highly contagious virus or life’s curly ways.

That indeed how true the famous quote that life is what happens to you while you’re busy making plans. 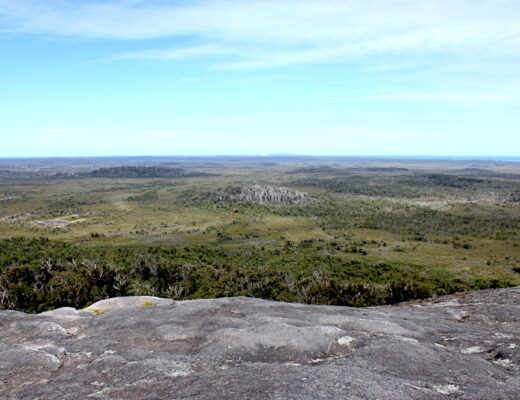 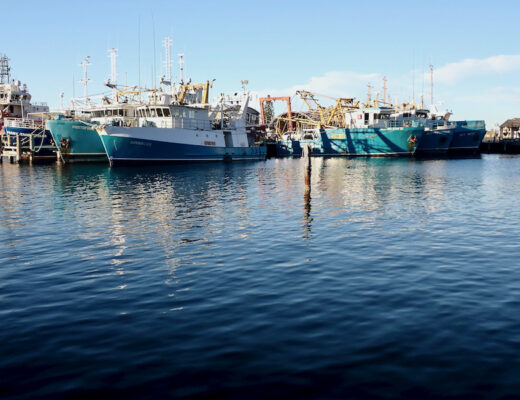 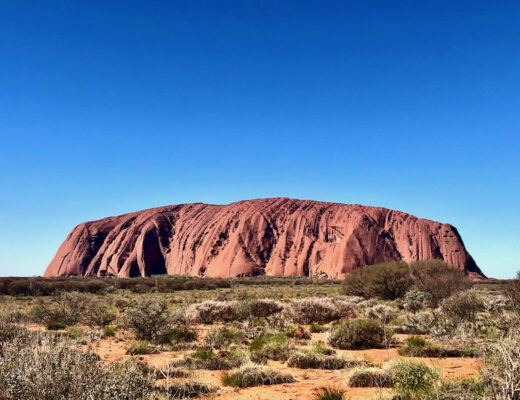